A star chart is a map of the night sky. With it, you can identify and locate constellations and stars. A typical star chart (see below) shows the relative positions of the stars and their brightness. 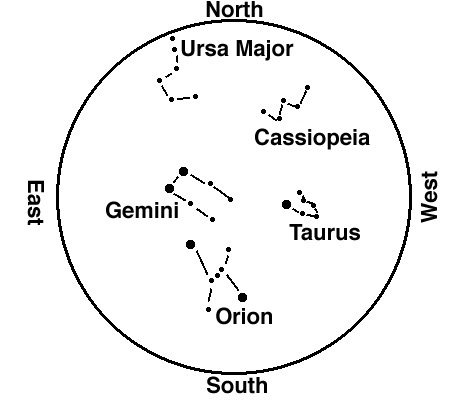 To use a star chart to identify stars and constellations, you must first find the one appropriate for the time of year you are observing. Notice that the chart above is labeled "Winter." Picking the chart appropriate for the season is important because as the Earth orbits the Sun, the Sun's glare hides many of the stars.

In the back of the text book and on the inside front cover, you will find four charts, one for each season of the year. (These seasons are labeled for the northern hemisphere). Thus, if you want to learn the winter constellations, pick the winter chart, which is sketched in very rough outline above.

Because each night the stars move across the sky, rising in the east and setting in the west, you also need to consider the time of night. The charts we will discuss below show the sky as it appears about 8 PM local time.

Once you have found the appropriate chart, you need to match it to the sky. First, you should match direction. That is, if you are looking south, you need to orient the chart so it shows the southern sky.

You will notice that the chart has labels north, south, etc. If you hold the chart so that south is at the bottom, it shows the sky approximately as you would see it looking south, with the center of the chart being approximately overhead. Referring to the chart sketched above, it therefore shows the sky as you would see it looking south at about 8 PM in December. (Keep in mind that this is only a sketch. Most of the stars are omitted.)

With the correct chart in hand you are now ready to match it to the night sky. Two steps are helpful here. First, look for star patterns. Second notice the relative brightness of stars in the pattern. The chart shows the relative brightness of the stars by their size. Dim stars are shown as tiny dots. Bright stars are shown by big dots. With that in mind, let's try to identify Orion.

Notice that the chart shows that Orion has two bright stars on either side of a dimmer line of three stars, which form Orion's belt.

Use the sketch of the chart to find the constellations Orion and Taurus on the actual chart in the book.

To learn the constellations you need to learn not only their shapes but also their relative sizes. Let's start with shapes. Find Cassiopeia on the Winter Chart and notice its shape.... roughly a "W." (You can remember this if you think of the "W" as the chair or throne on which Cassiopeia, the Queen, sits). The sketch below shows the outline of the constellation Cassiopeia.

Find Orion the Hunter. He is usually depicted as a standing figure with raised arms, one arm holding his shield, the other his club to defend himself against the bull, Taurus. Orion thus has a roughly "H" shape. 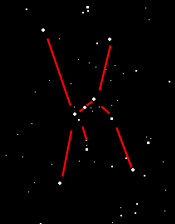 Find Taurus on the Winter chart. Taurus the Bull is easy to find if you think of his bright red eye (the star Aldebaran) and his horns that form a "V."

You have seen that Orion, Taurus, and Cassiopeia each have a different shapes (H, V, and W). You can also see that they differ in size. For example, Orion is much larger than Cassiopeia. But how much of the real sky does Orion cover? For example, could you cover it with your thumb at arms length?

When we talk about the size of a constellation, we are referring to how big it looks to us. That is, how much of the sky does it span. Technically, we measure size on the sky by angular measure.

Astronomers traditionally use angles to measure sizes and distances on the sky. To understand how, imagine two sticks joined at one end with a nut and bolt so they can be spread apart. If you hold these sticks up to your eye and sight along one to a given star and along the other to another star and then measure with a protractor the angle between the sticks, you will have found the angular distance between the two stars.

The figure below shows how that angle can be found for the size of the "bowl" in the star grouping we call the Big Dipper. The figure shows that this distance is about 20 degrees.

The Angular size of the Big Dipper

The above technical definition works well, but for ordinary sky watching, it is helpful to start with a simpler scheme using just your hand at arms length. If you hold your arm out straight and spread your fingers, the angle from tip of thumb to tip of little finger is about 20 degrees for most people, as the sketch below shows. 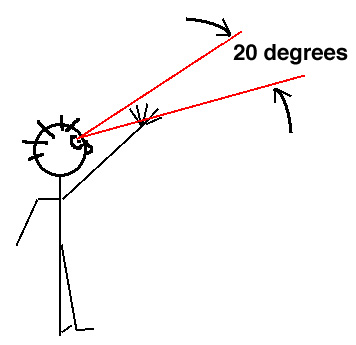 Using your Hand to Measure Sizes on the Sky

Thus, your spread hand will span slightly more of the sky than the width of the Big Dipper's bowl. Similarly, if you make a fist, then the angle between the knuckles at arm's length is about 5 degrees. These are of course only approximate, but will help you estimate relative size and distance in the sky.