The Night Sky at Different Times of Year

The Earth's motion around the Sun brings different stars into view as the seasons progress. In this section you will learn what constellations are visible at different times of year.

Below you can click on links to four seasons: October, February, May, and July. For each season you will find a simulated view of the night sky showing what you would see if you were looking south at about 8 PM from a middle northern latitude, such as most of the US or southern Europe. Each view spans roughly 120 degrees of sky, which is a little wider than your field of view. The left edge of the image is about southeast. The right edge is about southwest. The top of the image is about overhead. The dimmest stars have been suppressed to make the constellation patterns a little more visible and also (sadly) to simulate the effect of light pollution.

To help give you a sense of scale, each chart has an orange bar at the bottom that represents about the width of your spread hand at arms length.

Once you have looked at the map and noted any patterns in the stars that you can make out, move the mouse over the image. This will load a new image with the constellations marked and the brighter stars labelled. The constellation outlines are only approximate, but they do show its brighter and more obvious stars.

Try this on the sample below. 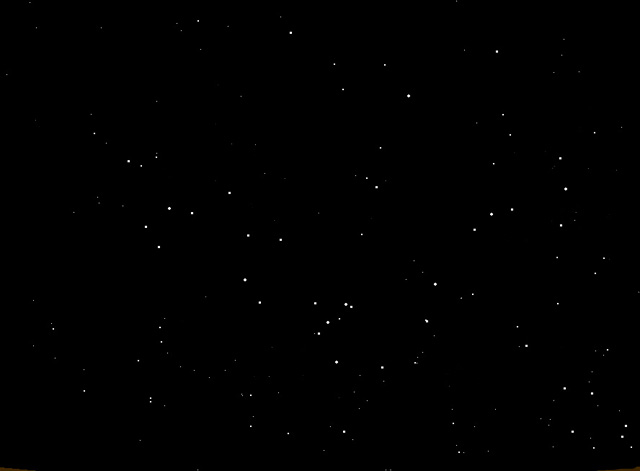 Now, move the mouse off the map and try to spot the patterns of each constellation on the simulated sky.

In addition to the southern view at each season, additional charts show the northern sky in October and February and the late summer/early autumn sky straight overhead.

To begin learning these star patterns, click on one of the seasons.