The Life of the Sun

NOTE: THIS PAGE IS UNDER CONSTRUCTION

If we could watch the Sun over many millions of years, we would see it change. Although now it glows a yellowy white, billions of years from now it will swell to roughly 100 times its present diameter and glow red. Moreover, If we could look back in time to about 4.5 billion years ago when astronomers think the Sun was born, it would be a huge, cold, dark, cloud of gas and dust. Astronomers describe such changes in a star's life as stellar evolution. 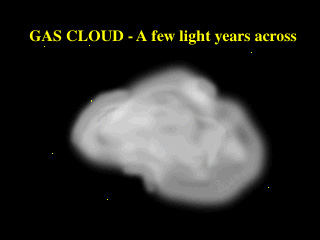 How did our Sun come to its present state and what will cause it to change in the future? This short lesson will trace what astronomers believe to be the life of the Sun and introduce a tool (the H-R diagram)they use for studying the evolution of stars.

All stars are thought to form from interstellar gas clouds. The gravitational attraction between the atoms within the cloud gradually, over millions of years, draws the atoms toward one another so that the cloud collapses. As it collapses, the gases in the cloud are compressed and grow hotter, eventually turning into the glowing sphere we see today.

At its birth, the Sun was much larger than it is now, but gravity made it shrink still more. During that epoch, the Sun was heated by gravitational energy released as it grew smaller. Eventually the Sun's core grew hot enough for nuclear reactions to supply its energy by converting hydrogen into helium. Our Sun continues to derive its power in that way even today, and will continue to do so for about another 5 billion years.

The animation below shows how the Sun converts hydrogen into helium. 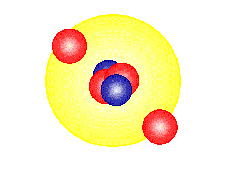 Over the next 5 billion years, the Sun will use up all the hydrogen fuel in its core. With no more core fuel to "burn", the Sun will adjust its structure. Its core will shrink and its outer layers will expand and grow cooler. In fact, at that time, far in the future, the Sun will swell up to about 100 times its present size, nearly engulfing the Earth.

This will make the Sun larger and redder - what astronomers call a red giant star.

To see these changes in the Sun's life, and more, click below.